Konstellation Press is a producing partner in Vanguard Culture’s History of Joy, second installment on Sacred Rituals & Generations.
Here is the YouTube link to the performance

https://www.youtube.com/watch?v=WMGsug2EW9U
A visual Essay of a story about four generations of women entitled The Brooch, followed by an interview with Konstellation Press founder Cornelia Feye, are the first segment in the video.

Death of a Zen Master is a mystery set in a remote Zen monastery and opens with the first-person experiences of protagonist Greg as he begins his regulated day. He is at this Zen retreat as penance for cheating on his wife Vega with a one-night stand, and it's only a two-week stay...a stay about to evolve into something totally unexpected.

As the early dawn unfolds, however, something disrupts the calm routine of the day. It's a tragedy all too familiar to the narrator: "This is the kind of stuff I have to deal with in my normal life. I just didn't expect it here."

Surprises unfold from the beginning, from the identity of the Zen Master whom he hasn't seen until the murder to the identity of a murderer who surely must reside among the residents at the monastery, since it is remote and largely inaccessible to the outside world.

Readers might expect the protagonist's lesson in peace will segue into a murder probe, but the references to Zen meditation and experience don't end with the killing: "I don't actually have a feeling, just an awareness of myself in connection with everything around me. It's crystal clear. I'm the observer of my thoughts, and I'm also the thinker. I'm totally engaged, and simultaneously completely still and receptive. It's the sweet spot, where I'm in the moment, instead of rushing through it onto the next thought, the next sensation."

This attention to spiritual detail juxtaposes nicely with the elements of a murder mystery investigation as Greg is forced to evolve on several different levels to handle adversities which feel both familiar and alien at the same time.

It's intriguing to see his personal evolution in the course of the story, even when a near-confrontation in a forest evolves into an appreciation for nature and quiet: "The sun warms my back. I smell the pine scent of the forest around me. Freedom. Take this, Abbess Clarita. Freedom is not always in the mind - it is in putting one foot in front of the other on a trail in nature."

From a murder to a hidden Buddha and the involvement of a ring of perps who all have motivation to kill, Greg faces multiple challenges, from regaining his wife's trust and considering the lasting impact of cause and effect to facing death himself, revising his perception of his impact upon and movements in the world.

Zen ideas and experiences run side by side with Greg's murder investigation and intrigue, creating a satisfyingly revealing story that operates on more than one level. It will especially intrigue readers with any degree of prior interest in Zen Buddhist perception, who will find the premise of a murder and a peaceful monastery's disruption to be thoroughly engrossing reading.

Death of a Zen Master is highly recommended reading for murder mystery fans looking for more spiritual and psychological evolution in their main protagonist than is usually proffered in the typical 'whodunnit'.

Advance Review for Death of a Zen Master:

5 star review By Jack Magnus for Readers’ Favorite
Death of a Zen Master is a murder mystery novel written by Cornelia Feye. Greg Stern was doing penance for a brief affair by submitting to a two-week stay at a zen monastery in a remote location. Said sentence was imposed upon him by his wife, Vega, as the condition for her remaining with him. Greg knew his dalliance was nothing more than that, but he realized that Vega was worth suffering through the early wake-up runners who announced the day’s start with a clamorous ringing of bells, the cold and primitive cabins, and the endless hours of meditation in the most uncomfortable positions ever devised by man. As the students gathered in the meditation hall, however, the hush was broken by sounds of despair, fear, and sorrow. Greg had been in law enforcement in the past and was now the head of his own private security company. He knew death when he saw it, and he was determined to find out who among the students at the monastery was responsible for the Zen Master’s death. 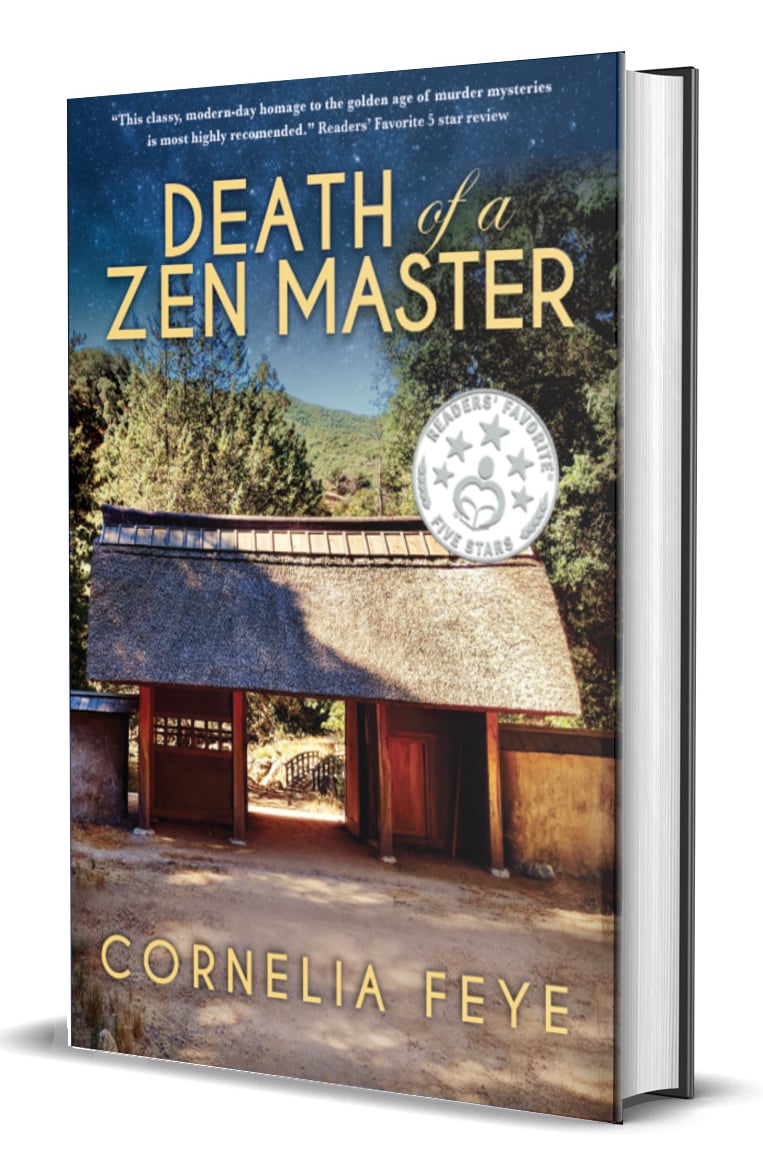 Cornelia Feye’s Death of a Zen Master is a well-written and absorbing story that harkens back to the classic murder mystery novels such as those penned by Agatha Christie. I loved the isolated setting for the crime and relished seeing the fear and suspicion of the students as they realize they are trapped with a killer, with no way out and no way to contact the outside world. Feye’s characters are finely crafted and true-to-life and her plot is ingenious. She gives the armchair sleuth plenty of red herrings to consider along with Greg Stern, as he tries to unmask the killer and stay alive. This classy, modern-day homage to the golden age of murder mysteries is most highly recommended.

"Forget your English Manors. and manners. A buddhist monastery in California makes the perfect setting for this engaging and clever take on the we're-trapped-in-place-and-someone-is-the-killer story. In Cornelia Feye's capable hands, the search for spiritual enlightenment goes hand in hand with the search for a murderer. A tasty Karma snack of a mystery novel." Corey Lynn Fayman, author of the award-winning Rolly Waters Mystery Series.
Available for purchase:

Death of a Zen Master - watch the trailer below: